Social media, education and toxic masculinity: would you expect these phrases to be synonymous with ‘gender equality’? Probably not! Although mainstream feminism and gender-justice advocacy has grown in size and engagement over the last few decades, many voices across the spectrum have yet to get a chance to speak up.

The COVID-19 pandemic has un-done much of our progress to achieve gender justice. As a global accelerator to champion gender equality, UN Women convenes the Generation Equality Forum (GEF), with Governments of Mexico and France co-hosting together with Civil Society and Youth.

What makes GEF so special?

As an inter-generational and multi-stakeholder process, the Generation Equality Forum is a ground-breaking effort to make transformative change in achieving gender equality in the next 5 years. The forum enforces the message that gender equality is intersectional: that our movement only increases in strength when we acknowledge that discrimination stems from a variety of factors.

The Generation Equality Forum kicked off in Mexico City in March 2021 and it will convene again in Paris in June 2021. Adolescents and youth are at the centre of the agenda and the forum aims to empower young people to turn their hopes of the future into realities - by calling on important decision-makers to join forces for a more equal tomorrow. Our goal is to achieve immediate and concrete progress towards gender equality that will withstand the test of time; be it a political challenge or another pandemic.

As a member of WAGGGS, the largest voluntary organization for girls and young women in the world, I was given the opportunity to speak at a range of events on various thematic areas of the Generation Equality Forum. Alongside 4 other WAGGGS Youth Advocates I called on decision-makers and other stakeholders to make concrete commitments to advance gender equality, and to meaningfully engage adolescents and young people in this global process. 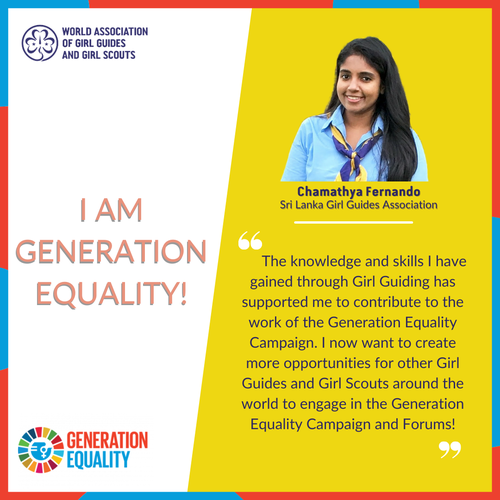 Chamathya Fenando’s (27) journey started as a WAGGGS Youth Delegate for the UN’s Commission on the Status of Women at the age of 19. A member of the Sri Lanka Girl Guides Association (SLGGA), she has now taken on a role in the Core Group, the highest decision-making body for the Generation Equality Forum. She served in the global Beijing+25 Youth Task Force set up by UN Women from August 2019 - September 2020 and currently serves as a member of the Generation Equality Youth Task Force (GEYTF). Speaking at the Closing Ceremony of Generation Equality Forum in Mexico City, Chamathya shared her message that: “Young people are leading the way to a gender-equal future and however uncomfortable our voices will be, we will speak out and repeat the demand for what we believe; equality for all”.

Chamathya was also recently appointed as a member of the jury composed of expert comic artists and high-level representatives for the “Global Comic and Cartoon Competition” organized by the UN Women, European Commission, Governments of France and Mexico together with Cartooning for Peace. 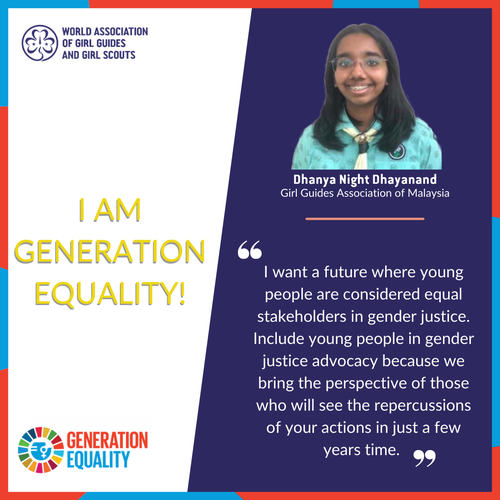 “Generation gaps prove that our societies are constantly innovating and moving forward” says Dhanya Dhayanand (14) a member of the Girl Guides of Malaysia, as she spoke at the ‘Global Youth Convening for Generation Equality’ pre-conference and at a high-level panel on adolescent and youth engagement. She emphasized that an accountable society is one that is honest and can admit its own internal prejudices. Dhanya also called out stakeholders on the lack of progress on the Beijing Declaration and Platform for Action and stressed the importance of youth engagement in the fight for gender justice. 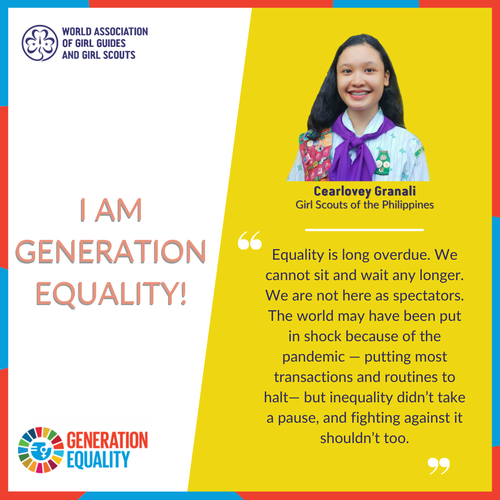 Together with Chamathya, Cear Granali (18), a member of the Girl Scouts of the Philippines (GSP) is co-leading WAGGGS’ efforts in the Generation Equality Youth Journey process in order to amplify the voices of girls and young women at global and national GEF processes. She is one of the national advocates of Together We Rise Philippines, a national girl-led advocacy project of GSP that falls under WAGGGS’ global Stop The Violence Campaign. She is also one of the Advocacy Champions of WAGGGS’ Girl Powered Nutrition programme in the Philippines. 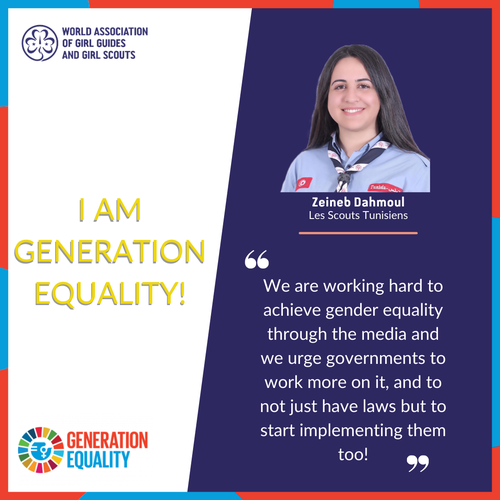 “Women appear in only a quarter of most mainstream media outlets” in the words of Zeineb Dahmoul (21), a member of the Girl Scouts of Tunisia, speaking at one of GEF’s high-level panels on the role of the media in achieving gender equality. She called for stricter policies that will protect young women working in the media and portray women’s stories in an ethical and non-objectifying way. 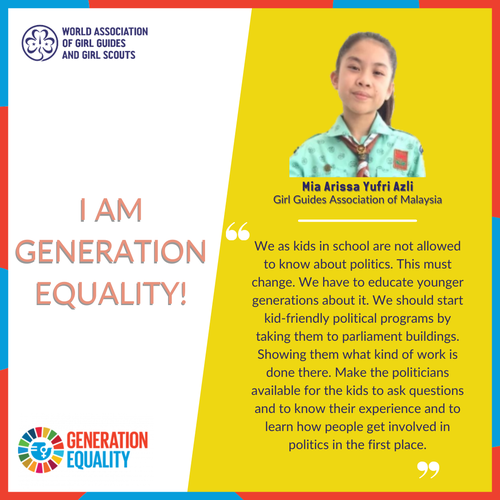 All girls and women already have a voice, they simply need to be heard. This begins with our schools and teachers. Mia Gary (12), member of the Girl Guides of Malaysia echoed these very thoughts as she represented WAGGGS in GEF’s high-level panel on the topic of “girls’ and adolescents’ participation in building a more equal world”. She bravely called out the education system (in front of some of its biggest stakeholders no less!), pushing for more political awareness and freedom of expression in schools.

WAGGGS Voice at the Generation Equality Forum in Mexico City