On the second weekend in March 2021, when most people would probably be relaxing with a book, Netflix or the few friends we are able to safely see, hundreds of European young people instead began their weekend by planting themselves in front of their computer and participating in the EU Youth Dialogue conference about young people’s political engagement in electoral processes, myself included on behalf of WAGGGS. 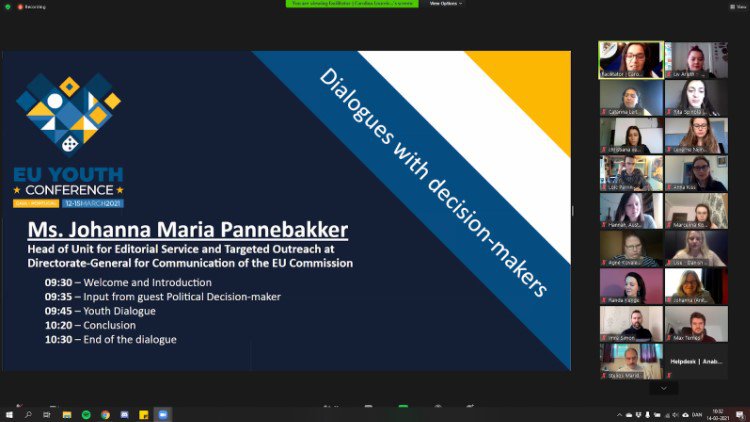 The objective of the EU Youth Dialogue is to gather young people, International Non-Governmental Youth Organisations (INGYOs), officials and decision makers to discuss topics which impact young people, with them. This time the cycle, which lasts 18 months, has focused on determining the issues and challenges young people find in democratic participation and the reasons, based on the 9th EU Youth Goal: Space and Participation for All. The first conference of the cycle held in Berlin, Germany focused on getting this information from youth all over the EU. The second conference was just held in Gaia, Portugal and here the purpose was to create action plans based on the issues determined by the information gathered since the last conference. Seven main targets to work on were identified:

As a member of WAGGGS Europe’s External Relations team, I participated in the latest conference hosted by Portugal. I hadn’t participated in one of these conferences before, so it was very much a Learning by Doing experience. I had participated in conferences before though, so I knew to stock up on snacks and easy to make food, since the schedule is always extremely busy and draining. So after my regular Friday work day ended I had two hours to run to the shops and get everything I needed ready for four days of hard work.

The entire conference was well facilitated, and during the plenary sessions sign language interpretation was available in both British English and Portuguese. The only technical issues I experienced during the entire thing was a plenary session admitting me a bit late, due to a server overload and a link for an optional session that I didn’t get before half of it was over. The work sessions were extremely well facilitated and resulted in high quality work across the board with very little time wasted. 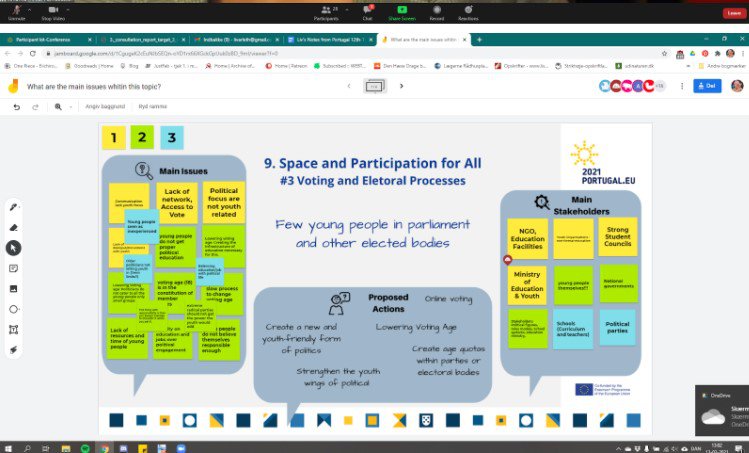 During the conference we worked in seven large groups based on the seven targets, which were then split into smaller groups based on identified issues relevant to the target. My group was Target 3 - Voting and electoral processes, and we had a wide representation of countries, INGYOs and youth councils. Besides formulating three great action plans, we also managed to find time for networking and to talk about anything from the Eurovision Song Contest, Portuguese comfort food and the weird weather that weekend. Usually these conversations would happen during coffee or lunch breaks, but since the entire conference was online we had to carve a little time out of the very busy schedule to socialise, so we wouldn’t burn out on the important work we were doing. Not that they hadn’t managed to schedule some social activities in the evening such as quiz night and game night, but the regular socialising and exchanging of ideas and perspectives you get to do at conferences was missing. I did actually manage a scout and guide meet-up by random one night, because there was---unsurprisingly---a fair amount of the participants representing countries or councils who were also scouts and guides. Our random meet-up represented Germany, Denmark (me), Greece, Slovenia and Romania.

There was a specific moment that made me particularly proud of my group, which was when we had to choose which of the action plans we would present to the panel of decision makers on the final day of the conference. After working 48 hours intensely on a project you get very attached to it, but all three groups were in agreement about which plan to present, without even discussing it. Specifically we all agreed that the action plan for lowering the voting age to 16 was more important to highlight than the plans for making sure young people are on the candidacy lists during elections and guidelines for non-formal electoral education in schools. This improves democracy in Europe by engaging young people in political decisions and reforms by creating lifelong voters rather than having election outcomes based on low voter turnout. Young people's participation in the electoral process envisions a better society which is not ready to accept the status quo but aspires to spark positive change. For instance, young people have been on the forefront in civil rights movements and the fight on climate change all across Europe.

Overall, it was an amazing experience to be part of something that can influence actual EU policies and their members. And the subject is extremely important for WAGGGS to engage in, due to our values, mission and vision. The next conference is in Slovenia in the autumn, and hopefully we’ll get to actually go there! I, for one, can’t wait! 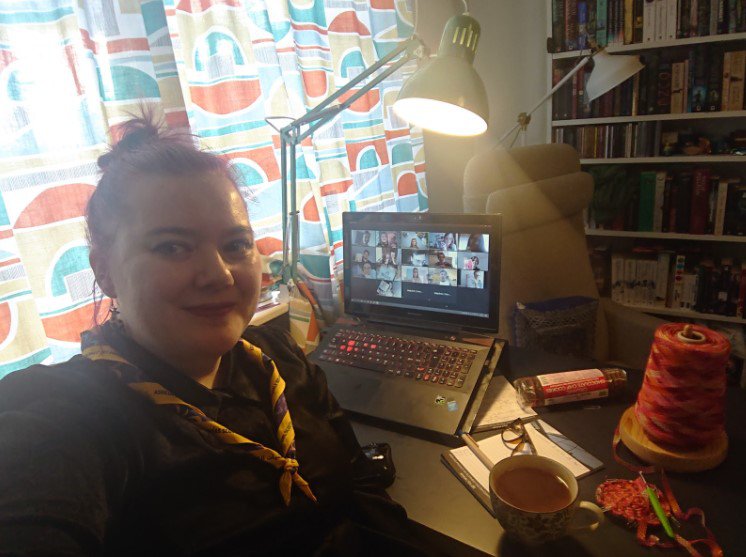