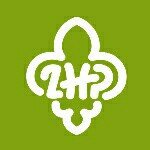 Polish Guiding started in 1910, with a troop in Lwów, at the same time as the first two Polish Boy Scout troops were established. In January 1913, a Guide section was created within the Headquarters of Polish Scouting and Guiding. Guiding increased throughout Poland which at that time was still partitioned among Austria, Prussia and Russia. Parts of Poland were under German and Russian rule, where Guiding was not allowed and so Guiding had to operate in secret. When the First World War broke out in 1914, contacts between regions became difficult because fighting was taking place on Polish territory, and a special Guide authority was established in Warsaw. Throughout this period, before and during the First World War, Polish Guides co-operated actively with all those who worked and fought for the independence of Poland.

In 1920, ZHP was represented at the 1st World Conference in Oxford and representatives of Polish Guides have attended World Conferences of Girl Scouts and Girl Guides since then. ZHP was a Founder Member of WAGGGS. The first national Guide Jamboree took place in 1924.

The year 1930 brought about a great change: a decision was made to establish within ZHP separate Guide and Scout Organisations, both with their own authorities at all levels. The Guide leaders created their own monthly paper called Wings which played a very important role in Polish Guiding.

In 1932, the Bucze Training School for Guide Leaders was organised in Silesia, and in the summer of that year the 7th World Conference took place in Poland, with Lady Baden-Powell among the many delegates attending.

When the Second World War broke out, many ZHP leaders left the country to continue Guiding/Scouting activity among emigré youth. The Guiding/ Scouting communities which remained in the Nazi-occupied country formed an underground organisation linked to the Home Army. ‘Trefoil Union’ was one of the underground cryptonyms of the Guide Association and became well known, earning high respect from Polish society. Guides helped the weak, the poor, the homeless and children in need in different ways, and they participated in the Resistance Movement all over Poland.

When in 1944 the Red Army and the Polish Army advanced into Polish territory, the new communist regime was gradually established. Guiding became increasingly difficult to practise due to political pressure and finally, in 1950, ZHP was suspended and an organisation for children with a few elements taken from Guiding and Scouting was organised in schools. Its name was ‘Scout and Guide Organisation’, not ‘Pioneer’ as in other Central and Eastern European countries. Poland resigned its membership of WAGGGS in 1950.

After the political changes of 1956, ZHP was re-established, and many former Guide and Scout leaders returned to rebuild Polish Guiding and Scouting as a co-educational merged organisation, not a joint one as before. But this traditional model was to survive for only a few years, as ZHP was gradually turned into a mass children’s organisation, increasingly permeated by communist indoctrination. The years between 1960-1980 were difficult because of a strong influence of the Communist Party on the Association, but a number of troops preserved the best Guide and Scout traditions.

After facing years of difficulty, the laws concerning associations in Poland changed and ZHP decided, at its Congress at Bydgoszcz in 1990, to return fully to traditional values and methods, and worked intensively towards returning to both Guide and Scout World Organisations. The final part of this process was the Extraordinary Congress of ZHP on 10 June 1995, which amended the Association’s Statutes, making them fully compatible with the requirements of WAGGGS.

ZHP has good contacts with many European Associations, some with a long tradition – more than 25 years. ZHP has hosted, and attended many European events.