Over more than 100 years, around 250 million Girl Guides and Girl Scouts have been changing lives and building a better world through leadership development, community action, service to others, peer education and advocacy.

How did Girl Guiding and Girl Scouting begin?

In 1909, a group of girls appeared at a Boy Scout Rally in the UK declaring themselves to be Girl Scouts. Lord Robert Baden-Powell, the founder of Boy Scouts, decided that there should be a Movement for girls.

Guiding was introduced that same year to respond to the specific needs of girls and young women. Groups of Girl Guides soon started in Australia, Canada, Denmark, Finland, New Zealand and South Africa.

A year later, the Girl Guide Association was officially established in the UK under the leadership of Agnes Baden-Powell, Robert’s sister. By 1912 there were also groups in Ireland, Portugal, Norway and Juliette Low founded Girl Scouting in the USA in 1912.

The movement continued to grow over the years, and today there are Girl Guide or Girl Scouts Associations in 150 countries!

How did WAGGGS begin? 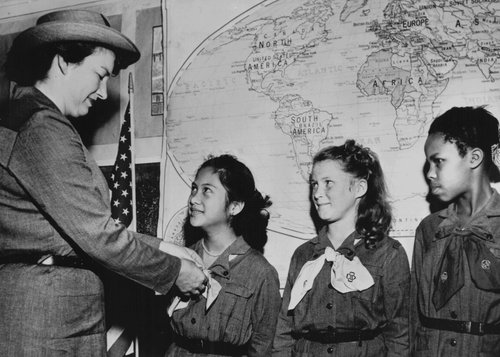 The First World Conference held in England, in 1920 was a historic occasion that gave representatives of the Girl Guiding and Girl Scouting world the opportunity to meet and exchange ideas and experiences. This contributed to not only a heightened and strengthened international scouting and guiding experience, but it also raised the awareness and profile of the movement.

Girl Guiding and Girl Scouting became known to the International Council and, for the first time, groups began to plan trips abroad, with the First World Camp organized to coincide with the Third International Conference, in 1924, Foxlease, UK, and brought 1,100 girls and young women together from 40 countries.

As the Movement grew and expanded, country representatives began to feel that it was time to create something more solid and binding and the idea of forming a world association was proposed after the 4th World Conference in 1926.

The founder of the Movement, Lord Robert Baden-Powell, sought the opinions of all known Girl Guide and Girl Scout organizations and asked them to consider the proposition. Delegates from 26 countries met at the Ffith International Conference in Hungary in 1928, and formed the World Association of Girl Guides and Girl Scouts (WAGGGS), with a World Bureau as its secretariat to be located in London, replacing an advisory body, the International Council created in 1919.

It was decided that the newly founded World Association would hold elections to determine a World Committee, of which Lord and Lady Baden-Powell, and the Director of the World Bureau, would be ex-officio members. International Conferences (now known as World Conferences) take place once every three years and to this day remain a platform for policy and decision making for Member Organizations.

The First World Conference was instrumental in shaping the collective experience of Girl Guiding and Scouting Scouting, in bringing a number of countries together to share their vision of the movement, shape the future and direction of the Guiding and Scouting World – a legacy which continues in our global movement today.

1908 – Baden-Powell published a book based on his scheme and ideas for the training of boys. His book, titled Scouting for Boys inspired thousands of boys around the country to join the Movement

Did you know? Scouting for Boys became one of the bestselling books of the 20th century.

1909 – The first Boy Scout rally, organised by Baden-Powell in Crystal Palace, South London, saw a number of girls attending. They were proclaiming to be Girl Scouts and prompted the founder to include girls and young women into the Movement.

1910 – The Girl Guides movement was formally founded in 1910 by Baden-Powell and his sister Agnes Baden-Powell.

Did you know? Even before the foundation of an association, groups of Guides had already existed in Australia, Canada, Denmark, Finland, New Zealand, and South Africa.

1912 – Juliette ‘Daisy’ Gordon Low founded Girl Guiding in the USA. She assembled 18 girls from Georgia on 12 March 1912, for a local Girl Scout meeting and believed that all girls should be given the opportunity to develop physically, mentally and spiritually.

1926 - World Thinking Day was launched at the Fourth International Conference.

1931 – The Movement continued to grow throughout the two World Wars and in 1931, WAGGGS reached one million members.

1932 – The first Juliette Low Seminar was held at Our Chalet.

1957 – The second WAGGGS World Centre, Our Cabaña in Cuernavaca, Mexico, was opened by Olave Baden-Powell.

2002 – The second GAT was launched, called ‘Our Rights Our Responsibilities’.

2008 – The third GAT was launched: ‘Together we can change our world; based United Nations Millennium Development Goals.

2011 – The WAGGGS Global Advocacy Campaign, ‘Stop the Violence – Speak out for girls’ rights’ was launched.

Symbols of the Guide and Scout Movement