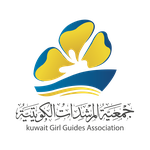 Upon my honour, I promise I’ll do my best, to do my duty towards God and my country, to help people at all times, and to respect and follow the Girl Guide Law.

I promise to do my best in carrying out my duty towards God and my country, and in helping people under all circumstances, especially those at home.

The Brownie must obey those who are older, must be resolute, must not yield to her whims, must take the Brownie Promise.

Guiding in Kuwait began in 1957 on a limited basis. By 1960, however, much improved programmes had helped to strengthen the Movement, and Guiding then spread to most schools throughout the country. The Association became established by 1965 and was licensed by the Ministry of Social Affairs and Labour at that time. In 1975 it came under the supervision of the Ministry of Education as it still is today. The Association became recognised in the country as an active educational force which offered young girls and women an opportunity for training on sound leadership.