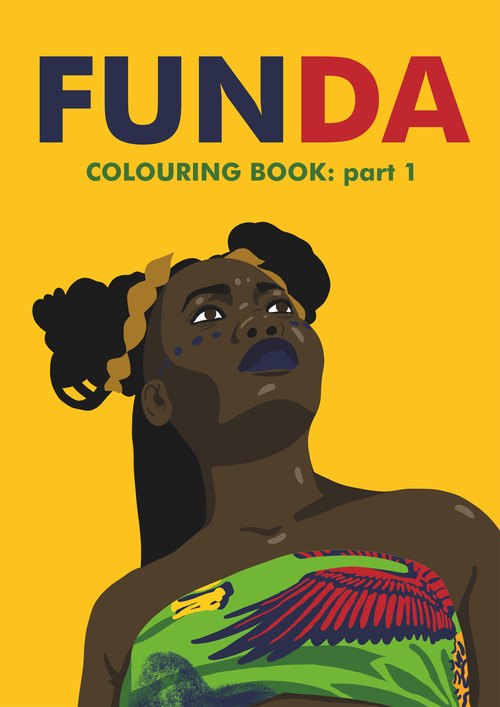 Joanna and Elizabeth met at the Juliette Low Seminar (JLS) hub at Pax Lodge, United Kingdom in November 2019; a flagship leadership event from WAGGGS to empower young women to break down gender barriers to leadership. Since the JLS, they’ve been working together to produce a relevant and accessible resource for schoolchildren in Zambia.

During the JLS, Elizabeth, who is a teacher in rural Zambia explained in a presentation to the Pax Lodge cohort that her students love colouring books, but the only ones available have Disney motifs or depict white children in a Western setting; “things not known to these children”. Elizabeth wished to launch a project where colouring books were created featuring “actual African settings, African backgrounds, the daily things that the children see.”

The result? Funda: named from Elizabeth’s local language where it means ‘to teach’, and because of the English word ‘fun’ in the name. Joanna got busy illustrating images that Elizabeth sent her of her local area, depicting scenes including traditional dancing and people collecting water.

To raise money for the printing of the colouring books, Joanna started an online fundraiser and achieved collecting the funds that were needed for printing, and she paid the shipping costs to Zambia herself. When discussing the challenges the pair faced and how they overcame them, Joanna stated: “I’m a person that doesn’t really like asking for help so it was the most uncomfortable part [of the project] for me [carrying out the fundraising].” To cut costs, Joanna sewed each colouring book together by hand.

Speaking to a Zambian participant and learning about the struggles in her community… this knowledge really changed my perspective on many, many things, and is what fuelled this project.

Joanna reflected that the experiences she had during the Juliette Low Seminar were new and refreshing; “speaking to a Zambian participant and learning about the struggles in her community… this knowledge really changed my perspective on many, many things, and is what fuelled this project.”

Speaking about the experience of collaborating with Elizabeth to create the colouring book, Joanna said: “It was a lot of fun and I have managed to learn a lot during this process […] The spontaneous decision to approach Elizabeth and be like, ‘hey, I can make colouring books for you’ turned into a great learning experience for me.”

But Joanna’s Scouting activities don’t end with Funda – she is also continuing to hold Scout meetings as a leader in her Association. Soon, the children in her group will be learning how to make filters for social media – a challenge she explains is very relevant, adding “I feel like this is going to be very interesting and developing for them.”

Both Joanna and Elizabeth’s clear leadership skills shine through as well as their determination and positivity. When asked if they had any advice for others in the Movement during this unsettling time, Joanna suggested: “Some leaders are fearful of using technology to continue Guiding and Scouting but I feel like this is a great opportunity, not a burden. My tip would be: Don’t fear technology, embrace the situation.”

A huge thank you to Elizabeth and Joanna for sharing their incredible project with us. If their journey has inspired you and you are looking for ways to continue Guiding and Scouting during the pandemic, take a look at the WAGGGS social media for weekly challenges to get involved in!