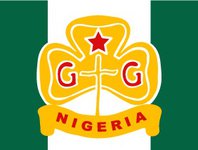 I promise to do my best: To do my duty to God and my country, To help other people every day, especially those at home.

The first Girl Guide company in Nigeria was formed in 1919 and before long companies were started in several schools in different parts of the country. Four years later, a committee of interested people was set up to encourage and direct the work of the rapidly spreading Movement. This committee, then known as the Central Nigeria Executive Committee, later became the Council of the Nigerian Girl Guides Association.

The first Brownie pack was registered in 1927, and in 1929 a company was formed in a lepers’ hospital. Ranger companies first appeared in Nigeria in 1934 and the further expansion of Girl Guiding led to the formation of Cadet companies. Girl Guiding quickly spread to all parts of the country and numbers increased rapidly.

The Nigerian Girl Guides Association’s new three storey building serves as the National Headquarters. It also houses a New Day Care Centre, the Guide Shop and a Conference Hall. The third floor is a transit hostel.

The Government donated over 13 hectares of land at Abuja, the national capital, for the use of the Association and the proposed 5th World Centre. This choice site is still waiting to be developed.

The Association celebrated its 80th anniversary with pomp and pageantry in 1999.