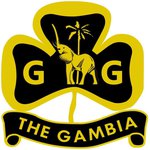 I promise on my honour that I will do my best: To do my duty to God and my country, To help other people at all times, and To obey the Guide Law.

I promise to do my best to do my duty to God and my country; To help other people every day, especially those at home.

Guiding in the Gambia started in 1923. Wives of British civil servants in the Gambia together with interested Gambian women kept the Movement on its feet at the time. Packs, companies and units were operational within the urban area and Guiding continued to function until 1943 when it became dormant due to lack of adult Leaders.

In 1946, however, it was revived by the first Gambian Chief Guide Commissioner, Mrs Rosamond Fowlls, who after her studies in the United Kingdom came home full of zeal and enthusiasm and put Gambia on the map of Guiding.

During this period Guiding was established in various parts of the country and the number of companies and packs continued to increase.

Guiding is now found in every accessible area of the country and has reached all sections of communities regardless of religion and ethnic origin. Many packs, companies and units are school based, due to the fact that the majority of adult Leaders are teachers and have the ability to devote much of their leisure time to the growth and development of children, preparing them for the demands and challenges of society in a rapidly changing world.