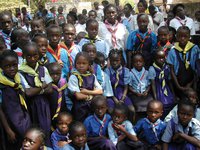 On my honour, with the grace of God, I promise to do my best to serve: God, the Church and my country, to help others in all circumstances and to keep the Guide Law.

I promise to do my best to be faithful to God, my country, my parents and the Law of the Pack, and to do a good turn to someone every day and to bring joy to the home.

Guiding in the Central African Republic began in 1952, and by the following year both Guide companies and Brownie packs had been established in the country. In 1955 a combined Guide and Brownie camp was organized, and during the next two years Guiding spread to many rural areas.

For several years no news was heard of Guiding in the Central African Republic, but in 1991 members combined their efforts to set up a new national team and to bring new life to the Movement. The Federation originally had two components but only the Association des Guides Catholiques Centrafricaines is functioning at the time of writing.