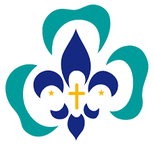 Guiding started in Luxembourg in 1915 and the following year the many different troops in the country were united in one Association. The Association des Girl Guides Luxembourgeoises was established in 1921 and was one of the founder members of WAGGGS in 1928. The Letzeburger Guiden (Catholic Luxembourg Girl Guides) was founded in 1938 by the Director of the Action Catholique Féminine Luxembourgeoise.

In 1990 HRH the Grand-Duchess Joséphine-Charlotte of Luxembourg was officially introduced as Chief Guide of the Bureau de Liaison.