Aware of the bad management of waste in Paraguay, members of the Asociación Guías Scouts del Paraguay decided to create a video to highlight how serious the issue is.

Focusing on how plastic bags are used in supermarket's, they recorded how many plastic bags were being used in a 3 hour time frame.

The 10 Scouts counted a total of 1761 disposable bags and only 30 reusable canvas bags.

"Even though we knew it was going to be a big amount, the results really surprised us.

"600 plastic bags per hour in a single supermarket out of the 300 supermarkets that Asuncion and its surrounding cities have.

"Although sometimes they are reused, most of the bags end up in the trash or dirtying our cities and streams.

"We are concerned that plastic bags have a very short lifespan, but they contaminate for hundreds of years." 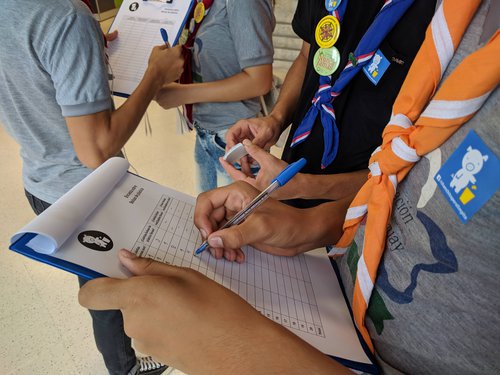 The purpose of the film is to highlight that although 2 years have passed since Paraguay passed a national law to promote the decrease in the use of polyethylene plastic, the use of plastic bags is still predominant and its negative impact on public spaces, rivers and streams increases. Likewise, they seek to motivate people to acquire the habit of carrying their own bag every time they go shopping.

The challenge will be launched on World Environment Day, 5 June. With this challenge, you are invited to share photos of yourself with your reusable bag. More details can be found on this Facebook page.

This is an environmental education campaign of the AGSP started in 2013 arising from the concern about the mismanagement of garbage on the sidewalks, streets and public spaces in Luque.

One of its important milestones was the implementation of a non-formal education curriculum designed to "generate a space for reflection and creation about the city of our dreams" through games and teamwork.

The project, carried out in 2017, reached more 700 children from 5 public schools in the city and was made possible thanks to a donation received from the Swiss Guides and Scouts from the city of Spiez.