Girl Guides Malaysia and UNICEF join forces to harnesses the power of 130,000 girls and spread awareness on children’s rights.

The Girl Guides Association of Malaysia and UNICEF joined forces to harness the power of 130,000 Girl 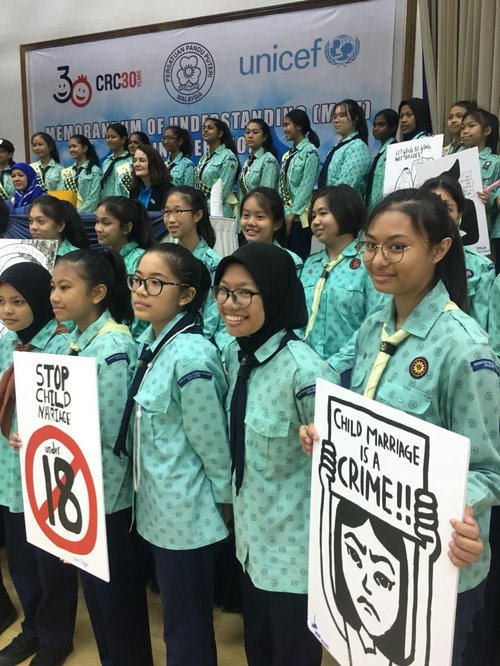 Guides to gather opinions on social media on children’s rights in Malaysia. The signing kicks of a series of events planned throughout the year as part of the ‘CRC@30’ campaign to mark the 30th anniversary of the ratification of the Convention on the Rights of the Child (CRC) in 1989.

The aim of the partnership is to turn the 130,000 Girl Guides across the country into child rights advocates. UNICEF will provide and facilitate access to U-report, an online platform which gathers the opinions of young people through SMS and other social media channels such as FB Messenger and WhatsApp on issues affecting children and young people in Malaysia.

By taking part in U-Report, the Girl Guides will improve their knowledge on a broad range of child rights issues, including education, protection and health whilst having the opportunity to exchange their knowledge and views with others on the platform.

“This initiative harnesses the power of 130,000 girls to use social media to promote and protect children’s rights for a generation that is growing up with the benefits and pressures of life online,” said Marianne Clark-Hattingh, UNICEF Representative to Malaysia. “This year, on the 30th anniversary of the rights of the child, we are proud to join forces with the Girl Guides Association of Malaysia. The future of every child in Malaysia is brighter, and for many, it will be because a Girl Guide showed them the way.”