“The WAGGGS Medal of Service is the highest form of recognition that WAGGGS can bestow and is awarded to individuals (volunteers or staff) who have distinguished themselves in their outstanding service to Girl Guiding and Girl Scouting at national and global level. The Medal of Service expresses gratitude to members of the Association whose service is considered to be exceptional, noteworthy and/or extraordinary in nature.” 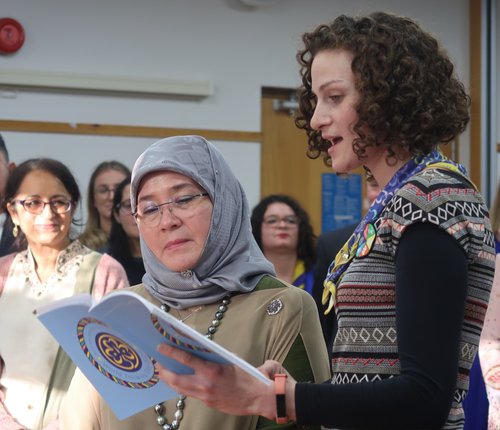 As Board Member of the Olave Baden-Powell Society, Her Majesty is determined to develop the potential of young girls and women to the international arena through Girl Guiding. Her Majesty was instrumental in supporting the membership drive of a few AP MOs through the World Guide Foundation.

Committed to empowering women, Her Majesty was appointed as President of Southeast Asia and the Far East Region, International Rural Women’s Association from 2010 to 2016. Prior to this, Her Majesty was Deputy President of the United Nations International Rural Women’s Association Committee from 2007 to 2010.

Her Majesty, as President of the Women’s Institute of Pahang, led the association onto the world stage registering the institute with the Associated Country Women of the World (ACWW), United Nations and as the Regional President and Deputy President she has attended conferences all over the world.

“As a Queen who lives by the principle of ‘Nothing separates the Ruler and her subjects’, Her Majesty often ignores protocol when meeting her subjects facing difficult times, or visiting inmates at prisons without a thought for her safety and position. It is therefore not surprising that Her Majesty is referred to as the ‘Jewel of People’s Hearts’.”

Every Girl Guide function that Her Majesty graces, Her Majesty’s famous quote is “Guiding made who I am today”.

Congratulations Her Majesty, The Queen of Malaysia!