Years before apartheid ended in South Africa, Girl Guides were meeting in secret, using their sisterhood and common passion to build bridges between segregated communities. Jolene Evans grew up in Port Shepstone, a coastal community south of Durban during the period of racial segregation. Despite this GIRL GIUDES South Africa (GGSA) was quietly building bridges between communities.

In 150 countries, 10 million Girl Guides and Girl Scouts have been using their power to improve the condition of their communities and the lives of others. This International Day of the Girl on 11 October the World Association of Girl Guides and Girl Scouts (WAGGGS) is celebrating this power and potential of girls by sharing stories like Jolene’s.

In 1986 she went on a Navy camp with 20 other Guides. The group was put into the “Indian barracks” together, thinking they would all be white. “Here were black girls, Indian girls and white girls all camping in this area which should not be multi-racial.”

The Black and Indian girls would not normally be allowed to visit the beach. But their Guide Leader would only allow one set of rules for her group. “She said, ‘over my dead body - we are a group of Girl Guides, what are they going to do?’” The group arrived in uniform and Jolene said people stared. “It kind of defied everything - nothing was ever said - but they went to the beach!”

Port Shepstone had a white Guiding group, an Indian group and black groups in surrounding towns. Also in 1986 the Indian group closed and the remaining girls joined the closest unit, which happened to be Jolene’s white group. “Again, our Guider at the time said, ‘what are they going to do?’ So we started accepting Indian girls.” This wasn’t seen as significant by the group, they saw themselves as girls who all loved Guiding. “We used to do a lot of things together,” Jolene said. “How we got away with it I don’t know.” 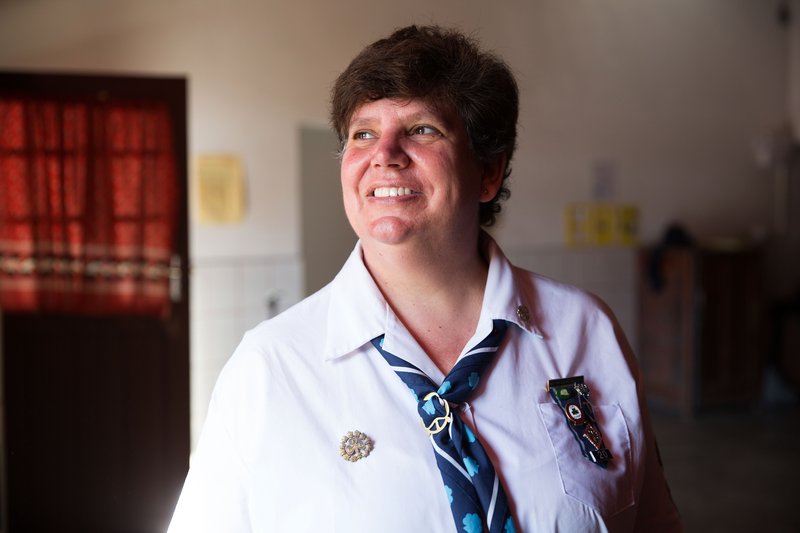 Nationally GGSA held their first multi-racial camp in 1979, but also published material teaching groups how to avoid segregation restrictions. “When I was sorting through a whole lot of old Guiding magazines I found one that actually told you how to have meetings with Guiders of other races and how you could get away with it,” Jolene said.

Jolene is now a Guide Leader in the same hall she attended as a child. She continues the organisation’s proud tradition of creating a safe space for all girls. “I’ve always had an open door policy. You get into trouble you can phone me. I’ll walk the path with you.”

International Day of the Girl