The Girl Guides Association of Kiribati 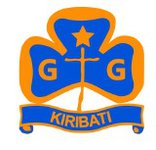 I promise that I will do my best; To do my duty to God, To serve my country and help other people, and To keep the Guide Law.

In 1926 a member of the London Missionary Society introduced Guiding to Kiribati, then known as the Gilbert Islands. The first Guide and Ranger companies were opened at the Training College for London Missionary Pastors in Rongorongo on the island of Beru. A few years later the Catholic Church also started units around the country.

Guiding activities were interrupted during the Second World War when the islands were occupied by foreign troops and the missionaries who had supported the Movement left the area.

In 1957 Guiding was restarted in the three main centres of Tarawa: Bairiki, Betio and Bikenibeu, supported by both local and expatriate women. The Association grew and reached schools in the outer islands. Cadet troops were also started at the training college and in secondary schools.

The Department of Education gave the Association its full support in developing Guiding, and seconded two teachers to the Association to travel to the outer islands to train leaders and assist in the recruitment of girls. The Association was also allowed to use the postal service free of charge.

In 1979 the Gilbert Islands became an independent republic under the name of Kiribati. In 1989 the Guide Association (UK) signed a Deed of Transfer giving the Girl Guides Association of Kiribati self-government in all areas of work.

In 1989 the Association devised a five-year plan to extend the Movement to the outer islands, a development hampered by lack of funds.