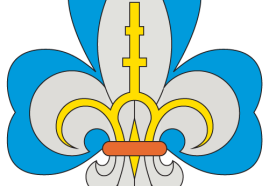 On my honour, I promise that I will do my best: To do my duty to God and to my country, To help other people at all times, and To keep the Girl Scout Law.

The Slovak Republic, or Slovakia, is located in the heart of Europe. It was part of the Czechoslovak Republic between 1918 and 1992. Now it is an independent state.

From the start, Scouting in Czechoslovakia developed as an organisation open to both boys and girls (working in separate units). The first Scout troop in Slovakia was founded in 1913. Groups of Girl Scouts began to form between 1918 and 1922 in various towns of Slovakia. In 1919 the Association of the Scouts and Guides of the Republic of Czechoslovakia, the joint organisation of Czech and Slovak Guides and Scouts, was founded. The Czechoslovak Girl Scouts (and therefore Slovak Girl Scouts) joined the World Association of Girl Guides and Girl Scouts in 1928, and so became a founder member of WAGGGS.

Girl Scouting grew and progressed until 1939, the start of the Second World War, which brought with it the division of Czechoslovakia. In Slovakia, the Government banned Scouting. But the Scouting spirit survived the war and other persecutions and after the war and the 1944 national uprising, Scouting re-emerged and was recognised by the state of Czechoslovakia.

The Girl Scout Movement in Slovakia has over the last 40 years lost the opportunity to reach several generations of children and young people. In 1990, however, the Girl Scouts were once again accepted as members of WAGGGS, and Guiding began to flourish once more. In 1993, when Czechoslovakia split and became the Czech Republic and the Slovak Republic, the Association applied and was recognised as two Associations. Today Slovensk´y Skauting is the Association operating in the Slovak Republic.

Slovensky Skauting have part of their website in English - www.skauting.sk/english