The Girl Guides Association of Saint Christopher and Nevis 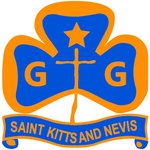 I promise that I will do my best: To do my duty to God, To serve the Queen and help other people, and To keep the Guide Law