Girl Guides in Malaysia are at the forefront of a campaign to ban child marriage to protect generations of vulnerable girls.

They want the Government to close legal lo 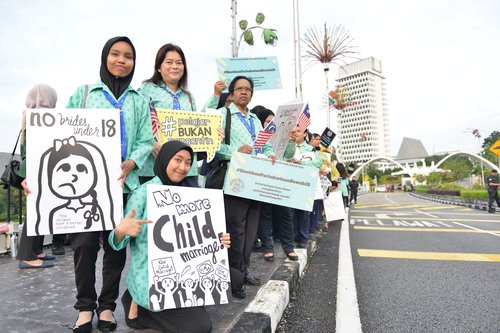 opholes which enable older men to marry young girls and want the age for marriage to be raised to 18 for all. The Girl Guides Association Malaysia believes young girls should be concentrating on their education rather than taking on the role of wife or mother until they are more physically and mentally mature.

The Guides have now taken their campaign to the Malaysian Parliament to present an extensive petition to leading politicians and Government Ministers early today (13 November).

Around 40 girls and leaders from GGAM were joined by representatives of various NGOs outside the Parliament building in the capital Kuala Lumpur. The petition contained more than 156,000 signatures and was handed to the Deputy Minister of Women, Family and Community Development, Hannah Yeoh.

The girls carried placards and banners as well as chanting slogans such as “hey hey, ho ho, child marriage has got to go” to emphasise their aims.

The issue of child marriage drew international attention during the summer when reports emerged about a 41-year-old man had married a girl aged 11. She was his third wife.

GGAM, which represents 250,000 members nationwide, took up the cause to end child marriage after 200 girls attended a Stop The Violence workshop and were outraged by the case when it was brought to their attention.

Among the Guides who attended the visit to Parliament was Leona, 16, who said: “I believe child marriage must end because every child should be entitled to education and they should have freedom to do things that only a child can do.”

Her views were echoed by 18 year-old Ranger, Kellysya Shah, who said: “Child marriage isn’t a personal matter between those engaging in it – It’s a form of child abuse and it is our duty to protect the children from it.”

Guides handed copies of their #NoBridesUnder18 posters to some of the politicians they met this morning.

Speaking outside Parliament, Yeoh acknowledged the public feeling about the issue and said work was under way to make amendments to the law. There are also consultations with State Governments. She added: “The government listens, and we do what is in the best (interest) of the child.”

Among those present to receive the petition were Deputy Ministers in the Prime Minister’s Department Fuziah Salleh and Hanipa Maidin and Deputy Education Minister Teo Nie Ching.

WAGGGS has supported the efforts by helping them to shape a strategy, with Advocacy Manager Jean-Ann Ndow and Global Programmes Manager Nefeli Themeli visiting to deliver training on how to campaign effectively and Head of Asia Pacific, Grace Tam providing support in country.