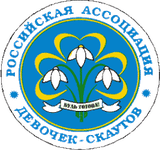 Scouting developed across many areas of Russia relatively quickly, perhaps as early as 1909. There are records of girl patrols in a range of towns from this time onward, but there was no national girls’ organisation.

Scouting was banned in 1919, and the Young Pioneers became the official state youth organisation. Many units continued to exist unofficially, but all had ceased by the mid 1920's.

Scouting returned in the years of perestroika. Many international contacts were made with foreign visits and aid offered as a result of the Chernobyl disaster. There was much interest on an international level in bringing Scouting back to Russia.

In 1991 FSR (Federation of Scouts of Russia) was created and almost immediately there was discussion on a programme specifically for girls. In 1993 in Perm the founding conference of the League of Girl Scouts of FSR took place. The girls’ programme and Movement developed, and in 1994 in October in Perm the next step was taken as the Russian Association of Girl Scouts had its founding conference. Representatives of WAGGGS and Girl Scout leaders from across the country (including other Scouting organisations as well as FSR) were present. A national board was elected and RADS as it is known today was established.

In 1996 RADS had its first National Girl Scout camp, and its biannual conference met again in Perm. The structure of the Association was altered slightly for more efficient management and expansion. All through the revival of Girl Scouting in Russia and the formation of RADS, much support in many forms was given by the UK as link country.

RADS today has the special challenge of continuing to build a national association in the largest country on earth. Russia contains many nationalities and ethnic groups, and this regional diversity is visible in RADS too.