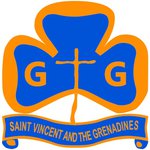 I promise that I will do my best: To do my duty to God, To serve the Queen and my country and help other people, and To keep the Brownie Guide Law.

Guiding was first introduced in Saint Vincent in 1914 by a Methodist Minister from England and Guide companies were established in Georgetown and neighbouring South Rivers. Unfortunately the Movement became dormant in the area after the First World War but was restarted again in 1927 in the capital, Kingstown, the new company being registered at Commonwealth Headquarters (UK) in 1928.

Guiding spread to other towns and later to villages; the first Brownie and Ranger units were started in 1931. By 1934 the Movement had spread to the Grenadines island of Bequia. The Association welcomed the World Chief Guide Lady Baden-Powell to St Vincent on two occasions – in 1951 and again in 1964.

In 1983 the Guide Association (UK) signed a deed of transfer giving the Girl Guides Association of Saint Vincent and the Grenadines self-government in all areas of work.