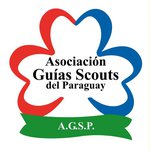 On my honour and with the grace of God I promise to do everything possible: To fulfil my duties to God, my country and humanity, To serve other people in all circumstances, and To comply with the Girl Scout Laws.

I promise to do everything possible: To fulfil my duties to God and my country, To help others always, especially those at home, and To comply with the Law of the Pack.

The first group of Girl Scouts in Paraguay, formed in 1923, was known as the Girl Scouts Brigade. The Association continued to develop until it was abolished in 1938.

Girl Scouting was reintroduced to Paraguay in 1959 when two separate initiatives were taken to establish activities. A group of Girl Scouts was started at the Escuela Normal Rural of San Lorenzo, and, at the same time, a training course for leaders was organized and participants later opened three Girl Scout companies.

After a visit to Paraguay by the Travelling Commissioner for the Western Hemisphere, a committee was set up, and in 1960 the Asociación de Niñas Guías Paraguayas was established.

In 1962 the Association, renamed the Asociación Guías Scouts del Paraguay, received official recognition from the Government.