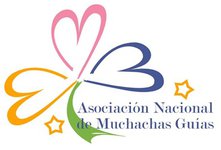 On my honour, I promise to do my best: To fulfil my duty to God and my country, To help other people at any time, and To obey the Girl Guide Law.

I promise to do the best I can: To fulfil my duties to God and my country, and To help everyone every day, especially those at home.

A Little Riding Hood allows herself to be guided by her elders.

A Little Riding Hood is not guided by herself.