The Girl Guides Association of Dominica 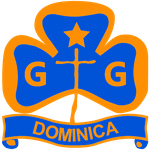 I promise that I will do my best: To do my duty to God, To serve my country, To help other people, and To keep the Guide Law.

I promise I will do my best: To do my duty to God, To serve my country, To help other people, and To keep the Brownie Guide Law.

In 1928 a Guider from neighbouring Barbados visited Dominica and persuaded her friend, who was resident in Dominica, to work towards the establishment of Guiding there.

In 1930 the first Dominica Girl Guide company was inaugurated, the first Brownie pack soon followed in 1931, and two Ranger companies were started in 1933.

Because of the effects of war, there was little Guiding activity during the years 1940 to 1945, but the programme soon resumed in 1946. After a visit by the World Chief Guide and trainers from the United Kingdom in 1951, new enthusiasm developed and Guiding became firmly established in Dominica. The Association functioned as a Branch Association of the Guide Association (UK) until 1986 when it became self-governing.

In 1979 the Association celebrated its Golden Jubilee but in August of the same year, Hurricane David struck the island and caused a major disruption to Guiding, due to large-scale emigration and a preoccupation with economic recovery and survival. By 1981, however, Guiding had resumed its normal activities and continued to grow steadily.

Over the past three years the Association has experienced a drop in membership. Most of the teenagers moved to the Scouts Movement (which is now accepting females) and other social groups. A Caribbean programme is being finalized to make the Movement more attractive to the Ranger age group. Locally a great deal of work has been put into developing a training scheme which will help the development of Guiding in Dominica.