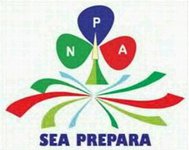 I will earnestly try: 1. To do my duty to God and my country 2. To help all people where possible 3. To obey the Guide Law

I will try: 1. To be a true Brownie 2. To help all people where possible, and also at home

I promise to be a true Elvita and to love nature.

The name of the Association was changed to the Padvindstersvereniging van de Nederlandse Antillen in 1977. Guiding has spread to all areas of the island of Curaçao and to all sectors of the community. Following the objective to increase membership, the Association started in May 1993 with girls in the 4-6 years age group. They are called ”Elvita“, which name honours Mrs Norma Elisabeth-Galaraga who was the first Guide who made her Promise after Guiding was introduced on the island. The Elvita programme consists of songs, games, stories and crafts especially for this age group. In 1995, the Association expanded to the island of Bonaire, starting with the Pre-Brownie and Brownie sections.

In 2014, during the 35th WAGGGS World Conference in Hong Kong the association changed name to Asosiashon di Guia PNA.