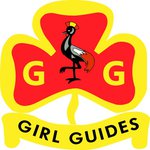 I promise to do my best: To do my duty to God and my country, To help other people every day, especially those at home

Guiding in Uganda began between 1914 and 1918 at Toro Girls’ School, but it was not until 1922 that the first Guide company was officially recognised and the Movement was firmly established.

Guiding subsequently spread throughout the country, and the Guide Association (UK) sent trainers to Uganda, who helped to organise camps and training courses. In 1956 the World Chief Guide visited Uganda and laid the foundation stone of the headquarters for the Girl Guide and Scout Associations.

During the 1970's membership declined because of the difficult political situation, but since 1981 Guiding has steadily grown and companies and packs which had ceased to function have been restarted, except in the North where there is still insecurity.