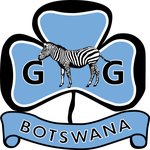 I promise that I will do my best: To do my duty to God, To serve my country and to help other people, and To keep the Guide Law.

I promise that I will do my best: To do my duty to God, To serve my country and to help other people; and To keep the Sunbeam Law.

Guiding in Botswana (then called Bechuanaland Protectorate) began in 1924 after a young girl, returning home to Kanye from boarding school in England, contacted other girls and interested them in the Movement. The Poppy patrol, with six members, was formed and by the end of the year a Brownie six had also started.

In 1928 a company of Girl Wayfarers, an organization for African girls working on similar lines to Guiding, was started by the wife of a missionary living in Kanye. Numbers grew steadily and interest in the Movement spread throughout the country. In 1936 the Girl Wayfarers, by affiliation with WAGGGS, became Wayfarer Guides, and by 1945 there was one Movement for all the girls in Botswana whose members were known as Girl Guides and Sunbeams. The Guide Association (UK), the Girl Guides Association of South Africa and members of the Movement in Belgium gave valuable training assistance to the developing Movement in Botswana.

In 1966 the country became independent and the Guide Association (UK) approved a deed of transfer making the Botswana Girl Guides Association self-governing in all areas of work.